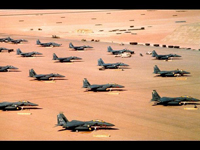 The Department of Defense has brought a deal before Congress to sell Saudi Arabia up to $60b in military hardware, including 85 F-15's, UH-60 Black Hawk's, and Apache attack helicopters. In addition to giving them more "birds in the air," the deal is expected to include advanced radar technology.

It's no secret that Iranian regional hegemony is a an equal, if not greater threat to Saudi Arabia than it is to the United States. Sunni Arab allies of the United States such as Egypt, Jordan, and the Saudi's are equally disturbed by the Shia Persian power's nuclear program, and this deal would boost the strength of its regional allies by providing a deterrent against an attack from any Ayatollahs who shall remain nameless.
Posted by Andrew Bruss at 1:26 PM