I don’t care what the Chinese calendar says, 2011 is the Year of the Mau5. Deadmau5’s final performance of his four-night run at Boston’s House of Blues demonstrated plain and simple how he has become the epicenter of the electronica universe.  Glide Magazine published a photo gallery of mine from the event and my review has some solid youtube video as well.
Mau5 spent the summer playing music festivals while competing against acts across the field like Arcade Fire and the Foo Fighters. His electronica contemporaries, such as Tiesto and Paul Oakenfold, have been singing his praises loudly, and it’s likely that everyone in attendance at the 16+ show in Boston will continue to spread the gospel like an army of dedicated publicists.
For anyone who isn’t well versed in the differences between house, big beat, acid house or dub step electronica subgenres, the one aspect of Mau5’s show you will rant and rave about are the production values. Daft Punk’s Alive Tour is probably the only other electronic act to tour behind such a spectacle, but Mau5 is the first to bring a production of such epic proportions into a nightclub.
Amongst the converted, the production values of the beats themselves are what has made Deadmau5 legend with the house heads. Deadmau5, AKA Joel Zimmerman, has developed a sound instantly recognizable within moments of a listen. In addition to the melodies he pumped on his hits such as “Ghosts ‘n Stuff” and “Raise Your Weapon,” Mau5 infuses every one of his tracks with digitally crafted tracks mastered to perfection. While the intro to “Some Chords” may have sounded simplistic, the multiple layers of bass, fuzz and high-end pitch are definitively Deadmau5. After infusing a slow creeping drum beat, the dance floor didn’t stop moving.
While his crafty music productions and impressive stage schematics have played a major part in his meteoric rise to fame, Mau5’s branding is what has him the most commercially viable electronica artist of the new millennium. Sasha & Digweed were huge, Tiesto still draws a crowd and Pretty Lights is bringing the party to every dance hall across the country, but who among them has an image as recognizable as Deadmau5? The proliferation of the Deadmau5 brand has played a big part in his ability to sell out multiple nights in a row at Boston’s House of Blues, New York City’s Roseland Ballroom, and plenty of other top-tier clubs. In Boston alone, Mau5 was selling roughly 400 sets of mouse ears made out of glow sticks at $5 a pop. In New York, I was told the number was closer to 800 sets a night.
Between the near-perfection of the beats, the extravagance of the live show, and the development of a recognizable brand (the message boards light up whenever Zimmerman reveals a newly built mouse helmet), Deadmau5 showed Boston in no uncertain terms why 2011 has been the Year of the Mau5.

Editors Note: I am contractually barred from running photographs from the concert on this blog.
Posted by Andrew Bruss at 6:12 PM 2 comments:

Global Post is reporting that Muammar Gaddafi was sodomized after being captured by rebels in Libya last week. Frame-by-frame analysis of the video footage shows what looks like a knife being forcefully inserted into the former dictator, whose death last week is looking more and more like an extrajudicial execution.

While Gaddafi’s treatment pales in comparison to what he spent over forty years doing to Libya, let's call a spade a spade. If this report is true, it means Gaddafi was raped. While the editorial staff of andrewbruss.com has refrained from shedding a single tear over Gaddafi’s death, we are whole-heartedly opposed to this type of action being committed by anyone, without exception.
The National Transitional Council just declared liberation in Libya but that news has been overshadowed by reports of Gaddafi and his loyalists being executed. Democracy is often born in chaos but sodomizing their former-dictator is pretty extreme. Even Saddam got to keep his pants on...
Posted by Andrew Bruss at 5:46 PM No comments:

Gilad Shalit: The Cost of Freedom

Gilad Shalit and I were both born in 1986 to a loving Jewish family who only wanted what was best for us. While I was studying journalism at Emerson College, Gilad was being held captive by Hamas. I think it’s fair to say that every Jew has strong feelings regarding the kidnapping and emotional release of Israeli Defense Force Sergeant First Class Shalit. In 2006, Shalit was kidnapped from his army post inside Israeli territory by Hamas agents who took him to the Gaza Strip. This morning Shalit was returned home to his parents and greeted by Prime Minster Benjamin Netanyahu. Shalit’s freedom cost the State of Israel 1,027 Palestinian prisoners, many among them guilty of planning horrific suicide bombing.
It is fair to say that no other country in the world would trade over one thousand prisoners for a single soldier. Then again, no other country in the world is in the situation Israel is in. Plenty of countries draft soldiers, but no country besides Israel is as dependent upon the service of every 18 year-old as is the Jewish State. This is why the nation's pledge to return every soldier, even their corpse, is considered sacred and the Israeli public overwhelmingly supported this prisoner swap.
But does that mean it was the smart thing to do? Will the Israeli public still support the prisoner trade if (when?) the freed prisoners return to terrorism? The cost of Shalit’s freedom rewards Hamas for what was a legal act of war and will only encourage them to kidnap another soldier.  Will the Israeli public still support the swap when Hamas brags that the success of Shalit’s kidnapping encouraged them to kidnap whomever they nab next?
How should we feel about Svuel Schijveschuurder, whose parents and three siblings were killed in a Jerusalem suicide bombing, only to see the criminal responsible being released in this deal. Along with Yossi Mendelevich, who lost his 13-year old son in a suicide bombing, Schijveschuurder and other victims tried to block the trade because they are convinced it will lead to their nightmare being renewed.
I personally feel nothing but joy for Shalit and his family as he returns home after a horrible ordeal he will spend years recovering from. But I also feel great sorrow. The final outcome of this ordeal is the greatest victory in the history of Hamas, and while it is also a victory for Shalit and his parents, the 18 year-olds currently serving in the IDF are the real losers in this deal. Their value as Hamas captives has just gone up. Way up.
Posted by Andrew Bruss at 10:55 AM No comments:

The City of Boston v. The Bill of Rights

I’ve been hesitant to weigh in on the Occupy Wall Street protests because to be honest, I am still not sure what to make of them. I support the movement’s general aim of improving the financial sector, but without stated goals or any sort of leadership, I’m still not sure what the end game is.
The movement has spread to dozens of cities around the country, including Boston, and my reluctance to weigh in on this movement vanished when the Boston Police Department arrested 141 people for protesting peacefully, only to be followed by Mayor Thomas Menino telling the world, “Civil disobedience does not work for Boston; it doesn’t work for anyone.”
Come again Mayor Mumbles? Ever hear of Martin Luther King Jr.? Mohandas K. Gandhi? The Boston Tea Party!?!?!?
The city was fine with Occupy Boston protesters (an offshoot of Occupy Wall Street) filling in Dewey Square, but when their protest spread to the Rose Kennedy Greenway, Menino’s tolerance for the Bill of Rights ran out.
Mark Leccese, a Boston Globe blogger and one of my favorite Emerson College professors, pointed out that between the Mayor and BPD Commissioner Edward Davis, they don’t even have a straight story regarding their decision to bust up the protest.  BPD spokeswomen Elaine Driscoll first told The Boston Globe they would not let protesters spread because of expensive renovations recently performed. However, Commissioner Davis did not seem as worried about the upkeep of city property as much as the threat of Anarchists. The Boston Herald quoted Davis as saying: “The group that was here for the first ten days was working very closely with us, but they warned us yesterday morning that a new group, the anarchists, wanted to take control.”
In the process of arresting 141 peaceful protesters, the Boston Police made a point of roughing up a handful of Veterans For Peace. The BPD even arrested Legal Observers who were properly identified.
Given Boston’s reputation as the birthplace American liberty (the suburb of Lexington to be exact), this whole episode is an utter disgrace. I have always been known to give the Boston Police Department credit where credit is due, but in this case, they should hang their heads in shame.
Editors Note: If you would like a better understanding of how other police departments have responded to these protest, an NYPD officer using mace against a handful of defenseless girls at an Occupy Wall Street event says it all.
Posted by Andrew Bruss at 10:40 AM 1 comment:

NOFX Was Punk In Drublic

NOFX’s performance at Boston’s House of Blues last night was a total mess of epic proportions, but the band wouldn’t have had it any other way. They took the stage half-cocked, drinks in hand and ready to have fun. As fans affectingly chanted “NOFX Sucks” the band tore through a set of career-spanning tunes that were connected by some of the wittiest stage banter I have ever heard. They were far from tight, but the comedy alone was worth the ticket price.
Sure, there were more stalled starts than can be counted, and the sound guy was drunk (leading to some ear-splitting feedback at times), but their carefree interactions with the audience were almost as much of a highlight as their run through, “Stick It In My Eye.”
Singer Fat Mike made plenty of jokes about college kids taking Adderall, his early childhood in Newton, Mass, and the group even took a couple of well-intended jabs at local acts like Dropkick Murphys and The Mighty Mighty Bosstones.
The musical element of the performance was far from polished but it didn’t have to be. NOFX makes punk music and take themselves far from seriously. Anti-Flag, who played an energized set before NOFX, worked the crowd up with messages of unity, brotherhood, and resistance to capitalism and military aggression. Although both acts have a similar set of fans, the force-fed message of Anti-Flag couldn’t be farther from the on-the-fly humor NOFX brought on-stage. Anti-Flag encourages tolerance of all races, ethnicities and sexes. NOFX, whose makeup consists of “White Trash, Two Heebs and a Bean,” made jokes about Jews, Mexicans, and even the death of Steve Jobs (“That’s just what the world needs. Less jobs”).
I’m sure they could have squeezed in an extra song or two if they’d been a little sharper, but if they’d been any tighter, it wouldn't have been as much fun. 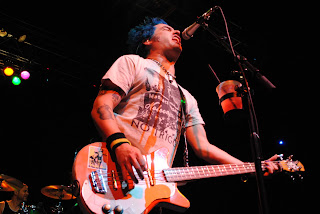 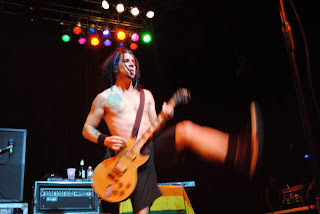 Posted by Andrew Bruss at 11:54 AM No comments: