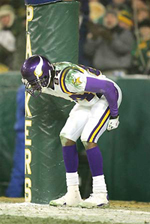 The NFL has asked Senator Russ Feingold to stop using footage of players dancing in the end zone as part of a campaign ad that targets the GOP's premature celebration prior to the upcoming election. It's no coincidence that Feingold, who represents Wisconsin, utilized footage of then-Minnesota Viking Randy Moss pretending to moon the crowd because the Vikings are the arch rivals of the Green Bay Packers. GOP-mouthpiece The Weekly Standard chose to run this news as an opportunity to slam the Democratic incumbent for misconduct, even though he has championed campaign reform and co-wrote the McCain-Feingold law on campaign finance.

I don't blame the NLF for continuing their policy of enforcing the copyright of past footage, but I will give a tip of the hat to Feingold's people for creativity.
Posted by Andrew Bruss at 3:12 PM