A New Day in Egypt: L’chaim 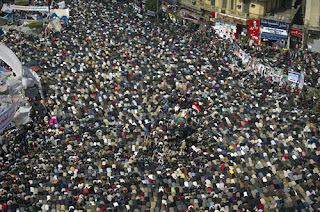 In the words of Rachel Maddow, "This is Egypt’s Berlin Wall Moment."

As hundreds of thousands of Egyptians party in the streets over the ousting of former-President Hosni Mubarak, many questions are left unanswered. (Former?)-Vice President Omar Suleiman announced that authority of the country’s affairs was being transferred to the Supreme Council of the Armed Forces. How long will they be the stewards of power, and or will they become the next despots?

Will the Egyptian people elect a secular leader like ElBaradei or will the Muslim Brotherhood hijack this revolution Ayatollah style?

Contrary to many fears, the peace treaty with Israel is likely to stay together. Whoever takes Mubarak’s place will depend upon the support of the armed forces and they will retain the peace.

The Egyptian Amy has never fared well against Israel. Even the 1973 war, which is a massive source of pride for the Egyptian’s, resulted in the Israeli Army miles from Cairo forcing the Egyptians to accept a cease fire. Nobody likes loosing and conflicts with their Israeli neighbor have always been destructive. However, Egypt’s Armed Forces have not had to suffer these consequences for over 30 years. Keeping peace that has allowed them to maintain their strength (and popularity) is the most sensible outcome.

In addition to the uncertainty facing Egypt, the fate of the Arab world is also in question. With protests in Yemen and Jordan already in action, will this amplify their efforts? Would revolutionary success on the Arabian Peninsula bleed into Saudi Arabia and possibly topple the House Of Saud?

Any of the above scenarios have the possibility of strengthening Iran by denying America a foothold in former allied nations. But this isn’t about the United States. Today is Egypt’s day: L’chaim
Posted by Andrew Bruss at 9:04 AM