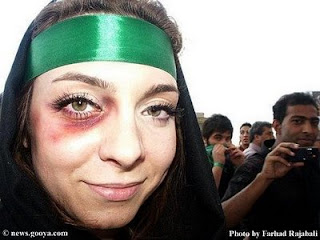 The protests seen in Egypt and Tunisia have already spread to Yemen and Jordan, and it appears as though the spark of revolution has ignited a fire in Iran.
Hundreds of protesters are reported to have been arrested and thousands have taken to the streets around Tehran University to demonstrate against the regime of President Mahmoud Ahmadinejad.  Iranian forces are using clubs and tear gas to beat back demonstrators and there is already one fatality reported. Although Iran's Foreign Ministry Spokesmen demanded Hosni Mubarak respect the wishes and human rights of Egyptian protesters, it turns the Iranian leaders are a bunch of filthy fucking hypocrites.
Following the stolen presidential elections in 2009, Iran saw the biggest protests since the 1979 Islamic Revolution. After widespread brutality (including the rape of imprisoned men and women) people stopped protesting.
Turkish President Abdullah Gul was visiting Iran and said at a joint press conference with Ahmadinejad that “the desires of people must be taken into account. In this respect, fundamental reforms must be carried out.” His trip was cut short when the Iranians learned that he planned to accept an invitation to visit the protests.
Many are wondering if the Iranian protests will go farther than they did in 2009 in light of the success of the recent Egyptian revolution. Menashe Amir, a veteran Israeli expert on Iranian affairs says the lesson Iranians should learn from Egypt is clear: When you take to the streets, don’t go home again!
Posted by Andrew Bruss at 1:07 PM