"Those kids" Beat Senior Citizen With His Own Cane. 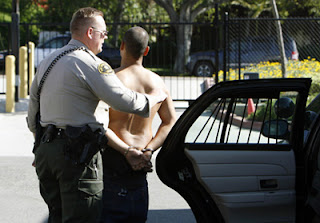 I’ve been reporting on Charlestown since August and for all the thefts and assaults I’ve reported on, it’s fair to say the crime-beat has gotten uglier.

A 70-year old man was beaten with his own cane on New Years Eve by a bunch of punk kids. Previously, a group of kids attacked maintenance workers clearing snow, shooting one of them in the back with a BB gun. On the same night, (a night residents have dubbed “hell night”) another youth blocked a car in the street, before forcing a family out of their vehicle, and driving off in their car. The Boston Police Department made 2 arrests in the most recent assault, but residents of the housing projects where the crime occurred feel this is part of a bigger problem.

I attended a meeting at the community center in the Mishawum Park Housing Developments and people couldn’t stop talking about unruly kids. Some folks said they think they need to beat their kids harder. Others said it was an issue of parents taking responsibility for kids.

In the article I wrote for Patch.com, I quoted Dianne Grant saying, “We keep saying ‘those kids,’ but they’re our kids!” One woman pointed out that kids have made a tradition out of throwing rocks at Cab’s and if they keep it up, “One of those cabbies is going to fucking kill one of these kids.”

As far as parenting, it seems that there’s too much stick available and not enough carrot, and this is not a passing of judgement. Frustrated mothers said they are willing to supervise kids if they’re provided a venue, but the community centers all close early due to budget cuts.

For the most part, the BPD officers in attendance said the community breed’s good kids and that the youth causing trouble are the same handful they have to keep dealing with.

We’re not parenting specialists over here at andrewbruss.com. As a once-youth with plenty of energy and the occasional disdain for authority, I know how hard it can be to channel that energy into something positive. Some kids use sports. I found journalism. Here’s hoping the youth of Charlestown find what they need. And soon…
Posted by Andrew Bruss at 2:20 PM