State of the Union: How Obama got his groove back 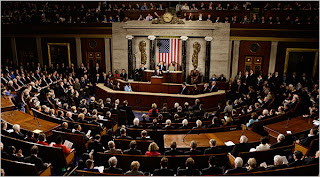 The talking heads seem pleased with the President's State of the Union address and I have to agree. Although it took over 50 minutes of his 71 minute speech to even mention Afghanistan, Obama addressed the primary concerns of average Americans: jobs, health care, a toxic political climate, and the misconceived notion that American exceptionalism is dead. The State of the Union address is generally an over glorified pep-rally, but while catering to his audience, Obama assured his electorate that we are still the same innovative country that beat Kremlin Joe to the moon.
Obama’s speech deserves due criticism for making bold claims without offering any specifics. He pledged to make substantial gains in clean energy and deficit reduction, but what the speech lacked in substance was made up for with constructive rhetoric that both sides of the aisle could agree upon.
This year there was no “both sides of the aisle.” In light of the tragedy in Tuscan, members of both parties showed unity by sitting with colleagues from similar areas, or even with similar interests (looking at you congressional women’s baseball team!). The president spent more time talking about respecting our political differences than he spoke about national security, and although that may disgust policy wonks, after two years of bruising political battles over health care, financial reform, Don’t Ask Don’t Tell, and Obama’s birth certificate, the encouragement of civil discourse is something that can ring true with any American.
Following the bruising mid-term elections, plenty of folks speculated that Obama was a one-termer already in a lame duck phase. Obama's second State of the Union proved the opposite. Now that our struggling economy is a burden on both parties’ shoulders, Obama demonstrated less of a partisan tone and vocally embraced Clinton-esque centrism.  Although the new congress was sworn in a few weeks back, tonight was the ceremonial kick-off to the second phase of Obama’s first administration. His approval ratings are up, and now that the Republican obstructionists have taken the House, America gets to see what their president is really made of.
Posted by Andrew Bruss at 9:11 PM