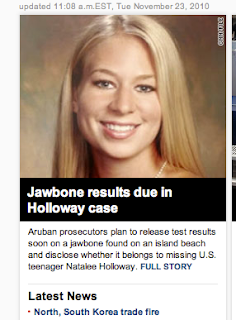 The most serious armed conflict between North and South Korea since 1953 is underway, but CNN.com demoted this story in lue of news about Natalee Holloway. The 18 year-old Alabama native went missing in Aruba in 2005 and for the past five years everything about the beautiful blonde's whereabouts has been deemed front page news.

With all due respect to the pain and suffering experienced by the Holloway family, CNN's editorial department needs to check their fucking heads. Two South Korean sailors died in an artillery barrage fired by their whacked-out neighbors to the North, and the prospect of war appears closer than ever. Nearly 30,000 US soldiers are stationed in South Korea along the 38th Parallel and they would instantly be thrust into a full-scale conflict between nuclear powers that would likely cost thousands of lives. But CNN has given greater significance to the discovery of a piece of jawbone that might be Holloway's.

It's the job of the media to report on news of interest to their consumers, but more importantly, news of significance. As emotionally engulfed as people have have been over a sudden loss "that could happen to anyone," giving this story priority over news from the Korean Peninsula is a disservice to CNN.com readers. The skirmish between the Korea's on the island of Yeonpyeong is being called "one of the worst clashes since the end of the Korean War" by BBC analysts. Upon the heels of heightened tensions over the North's nuclear program, the events of the last day deserve the full attention of the 24 hour network obsessing over the Holloway story.

For shame.
Posted by Andrew Bruss at 8:39 AM