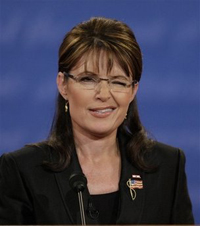 Turns out fact checking is another skill Sarah Palin didn't pick up in journalism school. The reality TV star recently criticized the Federal Reserve for taking actions she insists have caused inflation in the cost of foodstuffs. The former Governor of Alaska specifically said, "Prices have risen significantly over the past year or so."


Following her speech, Sudeep Reddy of The Wall Street Journal ran the numbers and said, "Grocery prices haven’t risen all that significantly, in fact. The consumer price index’s measure of food and beverages for the first nine months of this year showed average annual inflation of less than 0.6%, the slowest pace on record."

Palin took to her Facebook account to strike back at the Journal Reporter [whose News Corp. checks are signed by the same folks that pay Palin's Fox News contract]. Palin asserted that a WSJ story from November 4th reads: "an inflationary tide is beginning to ripple through America’s supermarkets and restaurants…Prices of staples including milk, beef, coffee, cocoa and sugar have risen sharply in recent months."

Unfortunately for Palin, the Columbia Journalism Review reports the article she cited made a very different point than the one she presented. The full quote from the WSJ articles actually reads: "An inflationary tide is beginning to ripple through America’s supermarkets and restaurants, threatening to end the tamest year of food pricing in nearly two decades." Clearly the article she quoted to support claims of inflation suggest food costs remain steady.
Although the cost of food does not appear to be inflating, it appears as though the value of fabricated facts are on the rise.